The Chestnut Canoe Company designed the Cronje to be a fast, reliable canoe for people who have a destination in mind. The design is rich in history and is a very able performer. Our reproduction of this venerable canoe retains both the paddling characteristics and the tradition of the original.

The Cronje is ideally suited to paddlers who want to challenge big, open water by covering distance with ease. Fast lines and excellent tracking make it a joy to use. Cargo capacity isn’t compromised for speed and the canoe handles well both with a load and empty. Its lower profile means less wind drag on the water and lower weight on the portage trail. The Cronje is most at home in landscapes with large open lakes like the famed Boundary Waters or Algonquin Park.

Category: Cruiser Canoes
Build Your Own Canoe
Where To Buy 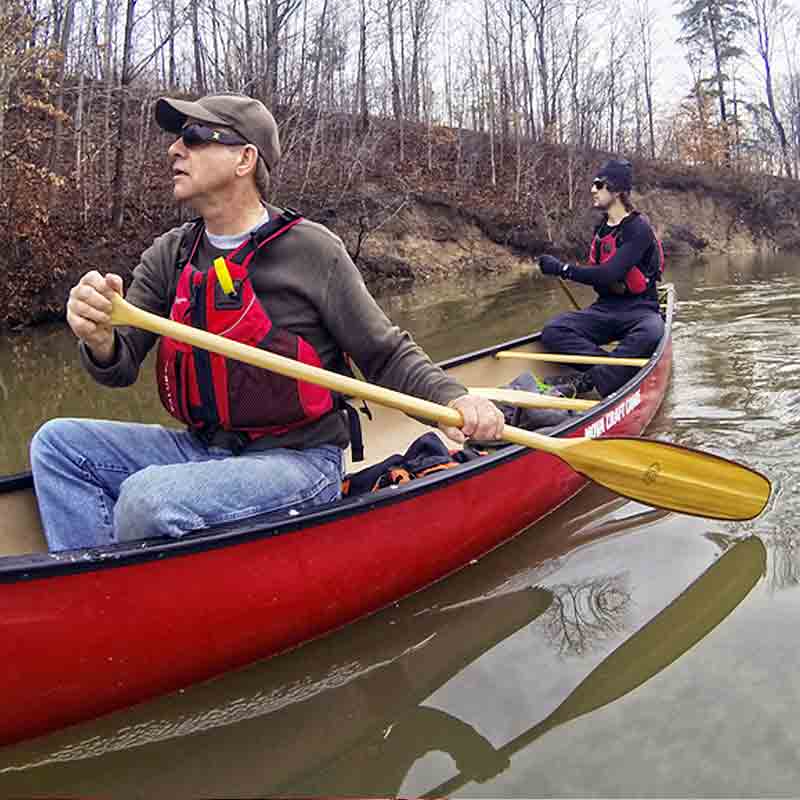 One word: Speed. If we want to haul some serious kilometres, the Cronje is our boat of choice. Fast, light and efficient, this canoe is ideal for paddling large open lakes or going the distance in an ultra marathon paddling race.

Learn more about our materials here.

In the summer I am a back country ranger in the Grand Tetons National Park in Wyoming. I paddle the Cronje on patrol over Leigh Lake which is a three by three mile lake in the back country at the mouth of two steep canyons. The top of those canyons is 12,000 feet and wind out of the West can come up at very high speed with very little notice.

The Cronje sheds the wind better than any tandem canoe I have used and tracks nicely with the speed sufficient to get our work done in a timely fashion. Sometimes we have to be somewhere fast and the Cronje gets that done better than any other canoe we have used. A very nice workhorse lake canoe with nice style making it fun to work in and with.

You have a satisfied customer in the Tetons who shows your wares off daily to the various campers in back country sites that we patrol by water. So many other boats going slowly or getting blown around. Just one Cronje getting there safely, on time and with style. Nice!

I’m totally impressed with my boat, as is my canoeing partner, and anyone who happens to see it. When we landed at the French Lake takeout after a week in Quetico last September, the park warden was there.. He took pictures of my boat and then was kind enough to open the visitor’s center to let us see the Centennial Cronje you donated to the park. By the way, he thought my boat was prettier! 🙂

We love our Cronje. Trim is perfect when I paddle in the rear and my girlfriend and the dog ride up front.

It’s strange that the folks at Chestnut Canoe Company named a canoe after a second-rate South African General from the Boer Wars. Then again, it’s not that strange. I believe William Chestnut (yep, that’s his real name) threw a dart at a dictionary to name some of his boats. Bizarre appellation notwithstanding, the Cronje is a really fine canoe.
Our Cronje was a translucent, ultralight, and made from Aramid cloth (generic Kevlar). Kevlar is just like Kleenex— it’s what everyone calls everything that’s light, yellow, and bulletproof. The core is made from Corecell, which has excellent strength, and Nova Craft is now using a rubber modified vinylester resin, which has better elongation properties (flexibility) than previous resins. It makes for a tough boat.
The construction of the Cronje is top-notch. It is built using infusion, where the amount of resin is precisely controlled and introduced to the mold under a vacuum, so it saturates the cloth with no excess or lack of resin. It makes for a strong and light canoe.
The seats of the Cronje are fixed, so trim adjustments are made by placing your gear strategically to distribute weight. It’s a little inconvenient, but you get used to kicking a pack with your foot to slide it forward. The seats themselves are unique to Nova Craft, made from heavy duty ash frames strung with boot lacing. That makes them tough, quick-drying, and easily field repairable.
If you want to paddle it unloaded, the Cronje will require some skill, as it has a rounder bottom than the other canoes we tested. That roundness makes for a quick and efficient hull, and all who paddled it enjoyed it. Loaded down, the Cronje settles down and is plenty stable for beginners. Seats are high enough to make kneeling easy, and those of us who are kneelers appreciated the ability to squeeze feet under the seat.
A lower shear line drops the capacity just slightly, especially compared to the iconic Prospectors, but that’s a good thing when the wind comes up. The Cronje handled winds of 25 mph, gusting to 35 mph, with aplomb.
The Cronje was the best boat of the bunch for padding solo. If you want to go fishing after setting up camp, the symmetrical hull means it paddles the same forward or backward, so just sit in the front seat facing the center of the canoe. If you wanted to go solo with a boat load and your 90-pound Labrador, it’d do quite nicely.
This is a canoe that a beginner could paddle, if said paddler is willing to take a little time to get used to a little less initial stability. The good news is that it would be very hard if not impossible to grow out of this beauty. The Cronje is built in several constructions, from the ultralight, which we tested, to the newer Tuff Stuff, a mixture of basalt and innegra fibers. If you want a little more traditional look, wood gunwales are available.